As our Champions continue to explore and learn why they were drawn to this strange world we will follow their goals and progress.

Coffin Hunters have been stealing children and treating them as slaves to collect salt from the Salt Hills north-east of Beelie Town. The champions have since discovered the Coffin Hunters' HQ and free the children only to have the building disappear without a trace when they tried to destroy it.

The Beam has been very cryptic about it's need for being saved. So far the champions have only been told to save the beams. They are currently en route to Kingston to learn more about the beams and the mysterious Dark Tower at their center.

The Champions have experienced new and extraordinary things while travelling together. High ranking members of The White have explained it as Ka, which most of the Champions understand as a form of Destiny. The Champions feel the urge to learn and understand this force that seems to be propelling them forward.

The chosen heros of the Beams, the magical forces that hold up the Dark Tower. All things serve the Beams. These characters are victims of Ka and have dedicated their lives, their minds and their weapons to protect the Beams and the interests of the Beam. 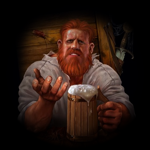 " I was just sitting there minding my own business when this big muscle bound guy, bigger than me, just lopped off that Coffin Hunter's head like it was warm butter! " 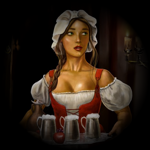 " I was about to server the cute one when the Ale Master's stuffy daughter caught his eye. She gets everything she wants. I can't stand rich winches. " 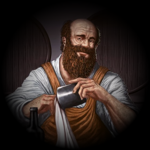 " The dumb one doesn't understand tipping, I'll tell you that right now. He's a cheap bastard. "

Agents of the Black King

Below are just a few of the foes met by the Champions. Sometimes easy, sometimes deadly but always dead set on being the one that ends the Champions chances of success.  However, most just end up dead.

Path of the Beam

A brief glimpse into the path the Champions have walked, foes left dead on the battlefield and friends made or lost along the way.

The Ka-Tet is formed

And away we go